Getting you Android phone connected to a Linux box is not so difficult; install and run adb (android developers bridge) to swap files. Mirroring and controlling the device is a bit more difficult. Using scrcpy makes it possible.
How does that work? scrcpy installs a server on your phone and communicates with the Linux box over adb. This server sends a video stream to the  Linux box; all input (mouse and keyboard) events are captured, which makes interaction with the phone easy.
For installing scrcpy there are to possibilities:
- build the app manually;
- run a docker image 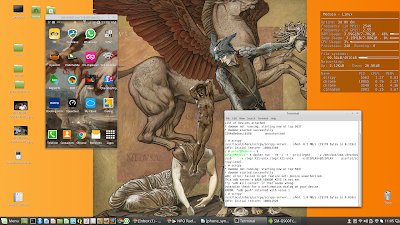 For me the last option is the easiest. I have adb installed and I have docker running.
For installing docker and controlling docker images with Portainer see: https://d3-media.blogspot.com/2018/08/portainer.html
Download or clone the image  from Github and follow the instruction:

- give docker acces to the x-server:
- check inside the container if there is a connection to the android device:
- run the docker image with one of the following option: amd, intel, nvidia:
- finally run scrcpy with options:
There are options for size, bit rate, crop, record screen, bu starting default works perfect. Once the app is running there various short cuts to control the device, look at the readme.
Run for example:
Here is the video: