View all
Get your own
Gepost door d3-media op 06:26 Geen opmerkingen: 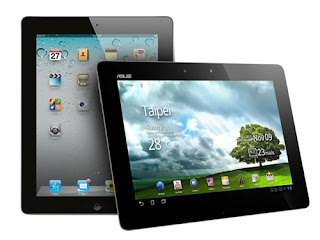 Making a comparison between the iPad3 and the ASUS Transformer Prime (TL201) is like watching a clash between titans. Apple gets definitely the honors for the break through of the tablet, starting with Ipad1. I used to work at that time on an HP TC 1100, very nice tablet with the computer in the screen, keyboard and pencil, but no one was then really interested. For me a fabulous machine still working after 6-7 years, but the iPad, although not really a computer, is more beautiful, lighter and faster for the day to day computer chores.
The iPad3 is even more impressive. Other tablets – from Samsung to Kindle fire for example, couldn't compete with this machines. So this would be my first Apple, I thought. However ASUS finally came up with a real alternative, the Transformer Prime TF201; here is the other titan who could engage in the battle on the market. Who is the winner?
Published at Gearburn: http://gearburn.com/2012/05/battle-of-the-beasts-the-new-ipad-vs-asus-transformer-prime/
Meer lezen »
Gepost door d3-media op 02:44 Geen opmerkingen: