Some time ago I installed Docker to explore Blockstack. I am working now with Docker for a while using the command prompt. Starting and stopping containers, pull and image of removing them is a lot of typing. And I make mistakes in the commands, forgetting a flag or the specification for the volume. I tried to find a GUI for docker: just creating containers with a click. Reading reviews from the web I tried Portainer. Portainer runs in a docker container and can be quickly installed: 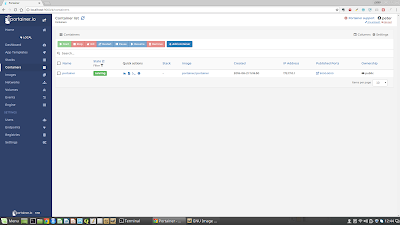 The interest  for Docker has been rising the past year, according to Google trends. That is not surprising because Docker has a lot of advantages compared to virtualization, using for example an Oracle Virtual Box. Docker uses only a part of the kernel; the software runs an a separate container. It is an ideal solution for developers testing software or user for trying experimenting.
When I work with R, making graphs and visualizations is important for data journalism applications.
The Shiny server of R is one of the most advanced possibilities. Running in a Docker container  you deploy the server in a minute can experiment as much as you like, without the change of wrecking your OS. 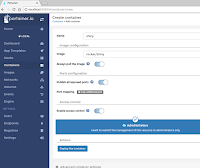 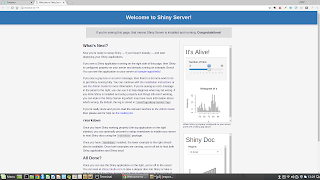