Get your census data from Wazimap

Open Data is a new kid on the journalism block. In 2011 president Obama decided that thousands of data sets of the government could be opened up to scrutiny by the public; (data)journalists, policymakers and businesses. This is the beginning of the open data movement. The new openness aimed at creating more transparency, enhancing efficiency, creating business opportunities.
After the US, European countries joined the open data movement. Let’s take an example. You are filling in your tax form, but you face a problem. There is a service: make a call to the taxation office. But how long would be the waiting time? The service of the taxation office publishes its data: topics of questions, waiting time etc. Analysis of these data could improve efficiency of this service, or diminish mistake in tax forms. Journalists could write a story about wait-times at this service.

The Sub Sahara countries stepped on the band wagon too with help of the World-bank, resulting in access to open data in for example Kenya, Tanzania and South Africa. Tanzania published an interesting data set about its 87000 water access point showing for each point quantity, quality of the water, but also longitude and latitude. A map of all working water point is green and not working water points in red can be produced for a story.

Code4Africa  plays an important role in accessing open data in Sub Sahara countries. The organization directed by Justin Arenstein is combining data journalism and ICT  to enhance transparency and democracy. Last year they received a $ 4.7 mill grant from the Gates Foundation to expand their activities in African countries. Their South African branch Code4SA is the most advanced of the Sub Sahara countries, with a wide range of different data about census, turnout of elections, sanitation.

Grahamstown
Census data is a large and interesting open data set, but the problem is how to handle the data to draw conclusions?  Accessing the raw data is generally not easy. You cannot ask the public to open up their spreadsheets software and start creating pivot tables and map the outcome on Google Fusion Tables. Special software or apps are needed to access easily these data sets.

Code4SA  did the job for the South African census and election data by creating Wazimap. Just type in a location, for example Grahamstown and the data are presented on maps and in various graphs and tables. Data journalists can dig deeper into the various tables and find the numbers they need. Each graph at right bottom has two links: ‘show data’ and ‘embed’. ‘Show data’ presents the matrix data under the graph, and ‘embed’ makes it easy to publish the visualization on your own online medium. And the hardcopy print newspapers? I could not find the button to export a graph or map in a high resolution format or vector format like .svg. The tools is fast and easy handle; no special skills needed. Reporting about census is getting easy. Everybody can be become a data journalist, it seems. 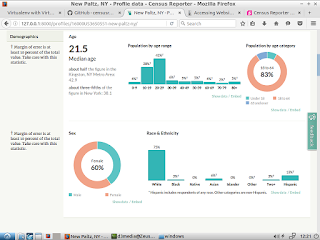 Main stream journalism
What is the effect of open data especially on journalism? Jonathan Stoneman  wrote a critical report about journalism and open data : “Open Data remains outside the main stream of journalism”, and “If Open Data is the answer, what is the question?”. Looking at the open data project from Code4SA, I think we can be a little bit more positive. However publishing data, maps and graphs is not journalism yet. Unless you argue that the graphs and maps are telling the story themselves, I think that journalism is about storytelling in an other way: talking to people and using the data as background information. Perhaps the rise of open data gives way to new developments in data journalism. First, the more traditional approach (“social science done on deadline”), using data for professional story telling. And secondly the open data approach is based on the lower threshold to data journalism practice. It focuses on easy publishing visualizations of data using services like Datawrapper  or using apps to access open data, like Wazimap.

Wazimap creates a useful platform to access data for story telling by (data) journalists, for example about living conditions in townships and settlements. It is just one of the projects . The attendance of the MP’s created by People Assembly  is another app which could be the basis of interesting stories: are MP’s doing their job by attending meetings?

News
How many stories are based on open data? No one knows the exact answer, because open data itself are not news. We have to turn it into news. That is, use open data as one of the sources for publishing investigative stories. This will work, I believe, on two conditions. Open data needs be in main stream journalism; that is publishing open data needs to focus on journalists. The government which provides the open data must focus on journalist as the end user. The journalist is in between the data and the public. And secondly, although the threshold is getting lower, journalists needs to be trained in working with (open) data and turn that into a story. Just publishing maps and graphs with a caption is not enough to get the attention of the user/reader. Creating context for the interpretation of that data remains an essential element of data journalism.
Gepost door d3-media op 01:47