NO, NOT THE IPAD; I WANT THE ASUS TRANSFORMER 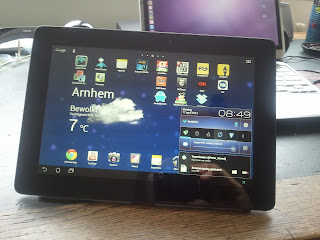 Sorry, he is not available, the shop assistant told me; ordering on line was no solution either. The ASUS Transformer was nowhere on stock. My rooted, white Pandigital tablet was too clumsy and slow to the job for mobile reporting and reading. I needed a real one. After quite some time, I decided to change my church, if there is no open source -Android tablet, then I'll take the new IPAD. I almost bought one when the shop assistant mentioned the ASUS, only two on stock. No, not the IPAD I want the Transformer, I yelled.
On Memeburn: why-the-new-ipad-might-not-be-the-tablet-that-saves-journalism

Concertgebouw
Reporting and teaching is traveling, and suffering because computers were always too big and too heavy. The ASUS Transformer Prime TF201 weighs 680 grams, perfect for carrying it around, but also for reading an e-book, newspaper or magazine in the train, plane or just in bed. The time that the cramp and pain in my hands forced me to stop are over. The 10.1 inch screen, 1280x800 resolution, is eye candy. Reading from screen is now a pleasure. And the IPS touch screen is fast without any glitches.

I am from the time of warm type setting, so I favor print and reading. But my god, the camera(1.2 in front and 5 megapixel in the back) and videos on this machine are fast with HD quality due to the quad core Tegra 3 processor. The sound, well not the Amsterdam Concertgebouw, but good for listening. A headset improves the quality, because the speakers are under the screen.
Connection to my wireless router is smooth using WLAN 802.11. Other connections are Bluetooth, mini HDMI, USB, and mini SD card reader. Storage is no problem with 32 GB. 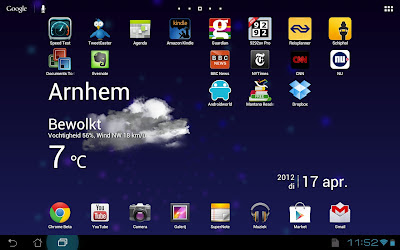 Android 4.03
The best thing is, the tablet is multi tasking. On screen you can easily switch from one process to an other. All due to the fast Tegra 3 processor running on Android 4.03 Ice Cream Sandwich. This is probably the reason that the ASUS was not available; at the time of release only Android 3 Honeycomb was implemented. Do you want the extras?
The on-screen keyboard works perfect, so why should you use the option of buying an extra keyboard? Or do you hate the greasy fingerprints on screen?   I like to control my machines completely, so I searched for rooting the device. That seems a bit complicated and I have not found a custom-rom doing something interesting. I am waiting for Ubuntu for Android.

But this tablet is not for doing geeky things, but for journalism. First it has all the reportings tools on board, sound, camera, text and a fast Internet connection, or could be downloaded for Google market. Second it keeps me in touch with my sources. Social media, from Twitter and Facebook to LinkedIn and Skype are working perfectly. Actually I only want to read my newspapers. From the Guardian to The Economist, or the New York Times and Memeburn, almost all are offering apps, some for free, other paid. So, when will the Memeburn app arrive?

Saving Journalism
Perfect tablets are important to journalism. Most newspapers are loosing money, laying of editors and reporters, because total sales of the print editions are dropping. On line editions are bringing in some revenue but not enough. Apps with a not expensive subscription could be the answer to the problems of the newspaper's business model. Clay Shirky commented on these issues. Wegener one of the tycoons of the local newspapers in The Netherlands is rolling out apps for all there local and regional newspapers, trying to stop the growing deficit.
Although I think that the ASUS Transformer Prime can easily compete with Apple's IPAD3, they both could save the newspapers and journalism.