Is Windows transforming into Linux?

My first machine was running MSDOS is operating system(OS). On top of it you run a simple word processor, spreadsheets and database  software. It worked but a graphical user interface(GUI) was still under development. Things got slightly better with the introduction of Windows; Windows 95 was the big take-off. And of course adding to the OS the Office software: Windows became the tool of preference. Although Windows software was installed on  90% of the PC's., it was generally no fun.

For example, you could get a blue screen or a completely frozen screen. You had to restart and if you did not saved your work you could start all over. Then the was the continuous updating by Microsoft; sometimes in the middle of your work. In the middle of a training Bill Gates stepped in to make things better.  And finally after all the updates, you had to find out where you could changed settings, the designers had changed the position and placed them under new headings.

Finding an alternative OS was in the beginning not easy and demanded skill and knowledge of Linux. But Linux adapted fast and developed  a complete OS with different tools. There was a cold war between Microsoft and Linux. Microsoft CEO Steve Ballmer described Linux at that time as “cancer ”. Although Linux was developing in the direction of a serious alternative for Microsoft., and with no cost: Linux is open source and therefore free. It was never accepted. Running and installing Ubuntu or Mint is not rocket science, and working on these machines is slightly different from a windows machine. It never convinced Microsoft die hearts.

Microsoft may have won the battle for desktops and office software, but the servers and network software is all Linux. So the problem is to enable Windows to talk to all the Linux machines. Finally Microsoft saw the light and start embracing Linux.

Azure, Microsoft successful cloud computing is running Linux. So Microsoft needed it own  Linux version. Secondly this Linux version should also work on Windows machines. Let’s have a look at the various options.

1. Installing Linux on windows is called WSL- Windows Subsystem Linux.The WSL comes in three  steps. Microsoft first introduced a Linux terminal in a distribution of choice, for example Ubuntu. Later it introduced a GUI, so you can run linux apps wit GUI.WSL1 only Linux terminal. Here is the documentation of Microsoft or read my blog posting in 2016.

2. Later Microsoft introduced WSL2  with a GUI  using Xserver. If you want to give it try, here is a nice video showing how to install. Running Linux inside Windows is one thing; but it works also the other way. From Linux you have access to Window files and programs. Type for example explorer.exe at the Ubuntu prompt and you have the file explorer show the directory you in. 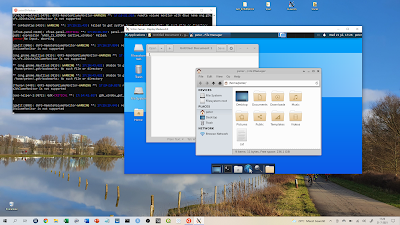 3. The latest is WSLg the GUI for Linux in Windows and it makes it possible to run directly Linux graphical apps. But you need to registers for the insider program and install windows developer version. It is to be expected that in fall with a new windows update WSLg will be implemented.

Microsoft own Linux version-CBL(Common Based Linux-Mariner). To install Microsoft Linux you can download the distribution and transform it into an ISO. To the get the feeling run it in a virtual machine. It comes  not with desktop and  GUI. CBL-Mariner is the Linux kernel used for running other Linux distributions

Yes the cold war is over and peace broke out between Microsoft and Linux. Microsoft is definitely embracing Linux and incorporating it in windows. And also Microsoft is heavily involved in the development of open source software since it acquired Github. But it is not to be expected that Windows will be replaced by Linux. There is too much invested in other related Windows software to start a transition like this. But as a user you could run smoothly Linux apps.

However, now I have a Microsoft Linux distribution (CBL-Mariner) and I can run Linux apps graphical in Windows, and start Windows apps from the Linux prompt. Nice but so what…. ? I am not a developer. And as  user I prefer to run either Linux app or Windows apps, avoiding not the get mixed up. At the end of the day it is still running Linux in Windows in container. For the moment I stick to Linux(Ubuntu or Mint), which both give the ultimate control over the machines and the installed software.