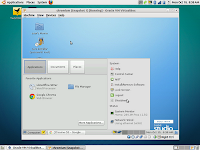 Google thinks there is a third segment in the market for operating systems(OS). We all know the various OS for desktop and laptop machines, running Windows, Apple or Linux. Next we have the mobile machines, phones and tablets, based on Android or Apple software. The third category is the notebook and netbook: tablets with a keyboard. Most OS have for these machines a light version. Google thinks that there is demand for a special operating system.
The OS called Chromium and is build around Google browser Chromium. It comes in two flavors: Chromium OS is the open source project, used primarily by developers, with code that is available for anyone to checkout, modify, and build. Google Chrome OS is the Google product that OEMs ship on Chromebooks for general consumer use. Amazon sells the Acer AC700-1099 ($349) and Samsung Series 5 Wi-Fi ($429) and they are both examples of these Chromebooks. 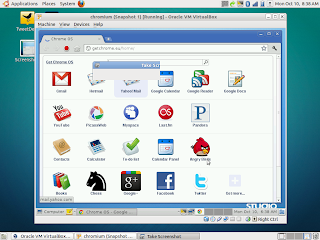 To get a taste of the Chromium OS I downloaded the image and installed it in a virtualbox. The OS is an abridged Linux system build around the browser. It boots fast, it is very simple and easy to handle. All the apps in the system are nothing else then links to web interface providing serves from e-mail to word processing, and of course most are Google based. However there is also a market: the chrome webstore, for third party software. Though generally they are not more than hypertext links to web application.

The philosophy behind the Chromebook and it's OS is: ' the web is the software'. You only need a browser to access. But do I need a special computer and an operating system to work with it? I think the price of the Chromebooks is a bit high. Secondly this netbook has an incomplete OS. If I want to work within the chrome philosophy it is still possible with a light but complete (linux based) OS. Here is an overview of 10 fast booting Linux distributions.  I expect that  this Google project will hardly survive the growth of Android based tablets and phones. The netbook will become a very limited market. Finally if you don't have an Internet connection, you are completely out of business, access to the cloud is essential, even for simple things as writing. Therefore I doubt that the Chromebook and it's open source OS to become a success. 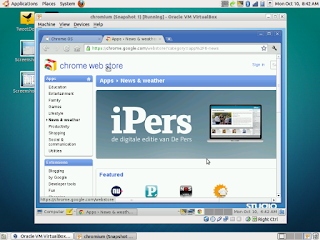